Fall in to Soup 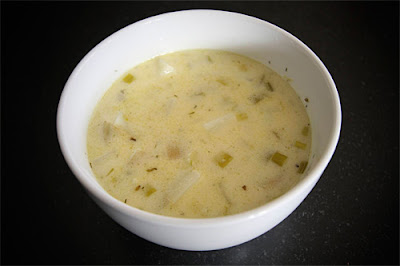 It was a blustery day today and the prefect day for a yummy cozy soup. I have made potato leek soup for years now and always enjoyed the outcome, but this time I think I hit the mark and wanted to write it down before I forgot. It turned out perfect - flavorful and creamy without any curdling.

I did a few key things differently this time. I added a little bit of wine to add some depth, used part half and half and vegetable stock instead of all lowfat milk and then heated the liquids before adding them to the soup to prevent curdling. The half and half I thought would add the creaminess I was looking for and the vegetable stock would cut some of the guilt I had from using the half and half as well as adding some more depth of flavor that is sometimes lacking in cream based soups. Then at the end, I added a little bit of fontina cheese for it's swiss cheese flavor quality and great melting abilities. Some of the time frames I listed in the recipe are not exact, but close since I was ad-libbing, however this is not a soup to just put on the stove and leave (any dairy based soup isn't) so keep an eye on it and you should be ok. But it's super quick and easy so you won't have to watch it for long. Paired with some rustic grain bread, it was the perfect fall dinner eaten by the fire - enjoy!!!

Melt butter over medium heat then add leeks. Saute leeks until soft several minutes. Add wine to leeks, bring to a boil until liquid is reduced for several minutes. Slowly add flour to leeks stirring constantly to incorporate and cook for one minute. Warm the half and half then slowly add to leeks constantly stirring. Heat for several minutes until slightly thickened. Warm vegetable stock and then slowly add to soup constantly stirring. Add potatoes, herbs and salt and pepper. Bring to a boil and then reduce heat to a simmer and cover. Simmer soup for 10-20 minutes or until potatoes are tender. Occasionally stir to prevent sticking on the bottom. Add cheese and melt in soup before serving.

* Heating the half and half and vegetable stock before adding it to the soup will prevent any curdling
** Save the hard ends of parmesan rinds and put them in a soup while simmering for added flavor. Remove it before serving.
Posted by Jessica