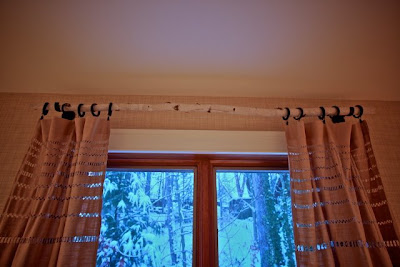 I feel like I have been saying this frequently lately, but it has been a while since my last post. With the holidays and the baby just around the corner, I feel like I either haven't had the time or the will to keep up with new posts. I am now on my maternity leave and in the waiting game so I really shouldn't have an excuse at least for a few days until the little one arrives.

I have pretty much finished her nursery and am just thrilled with it, but I am refraining to post pictures of it in it's entirety until my husband finishes the shelves that are to go above her chalkboard/desk area. He has been promising to do it for weeks now, but I have a hunch that he procrastinating because he doesn't want to put holes in the wallpaper. That aside, now on to my original reason to be posting.

I wrote a while back about a company that sells all kinds of branches and loved their stuff, but was disappointed that I had to buy five branches when I just needed the one. My husband is the master at finding anything online and so he found a random florist in Wisconsin that would send us a white birch branch at any length and pick the straightest one they had for $25. Not too shabby for a curtain rod. When it arrived in the mail, it was perfect (see above). I love the extra little unexpected touch that the branch brings to her nursery as well as the warmth. I found the linen textured curtains for a song at Cost Plus World Market for just $15 a panel. A steal!! I have a lot of favorite elements to her room, but I hope you like this one as much as I do! More to come!
Posted by Jessica

what is the name of the place your husband found in wisconcin?